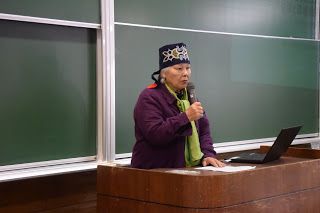 Ms. Shizue Ukaji is a legend in her own time. In 1973, she organised and led the Tokyo Ainu Association for the human rights of the Ainu in Tokyo. At the age of 63, she started learning Ainu embroidery. Her pieces are marked by using Ainu Yukar (epics) for the expression of her image in a combined manner of Ainu embroidery and Japanese clothes. She is now well-known as an embroiderer and a writer of picture books in addition to the liberation campaigner. However, her enthusiasm against external powers’ suppression of Indigenous peoples does not deteriorate yet. In February 2017, she protested with Ainu clothes along with her allies about Japanese mega banks’ investment in the building of the Dakota Pipeline in front of the headquarter of one of these banks. Additionally, she is one of the special advisers to the Citizens’ Alliance for the Examination of Ainu Policy, which Hiroshi Maruyama, principal organiser of the International Conference on Policy towards Indigenous Peoples in Sapporo, organised with professor Kunihiko Yoshida at Hokkaido University.